With Paris being one of the major fashion capitals of the world, the catwalk shows that take place in the French city each year are a fantastic indication of upcoming trends for the next season.

When it comes to menswear, there were several standouts from the 2018 show, with so much style inspiration to be found.

A suit is a classic outfit that just about every man has in his wardrobe.

However, while a suit may be the outfit of choice for corporate situations, there is no denying that suits tend to look quite rigid, and are usually not well-suited for the hot months of summer.

This is one of the reasons why suits took on a much more casual air on the runways of Paris Fashion Week, With everyone from Louis Vuitton to Thom Browne producing suits, but with shorts instead of long suit pants.

Some of the most wearable styles were seen at Dior Homme, where suit designs focussed on the traditional black and white suit. However, these were worn with black shorts that had quite the street wear edge, and with impeccable tailoring, of course.

Dries Van Noten took this even further, which is hardly surprising considering that he is one of the designers who have forever changed the course of the menswear industry. On the Van Noten runway, suits were also short, but were paired with retro-inspired long socks, as well as suit jackets that were especially boxy, all of which worked quite well together. 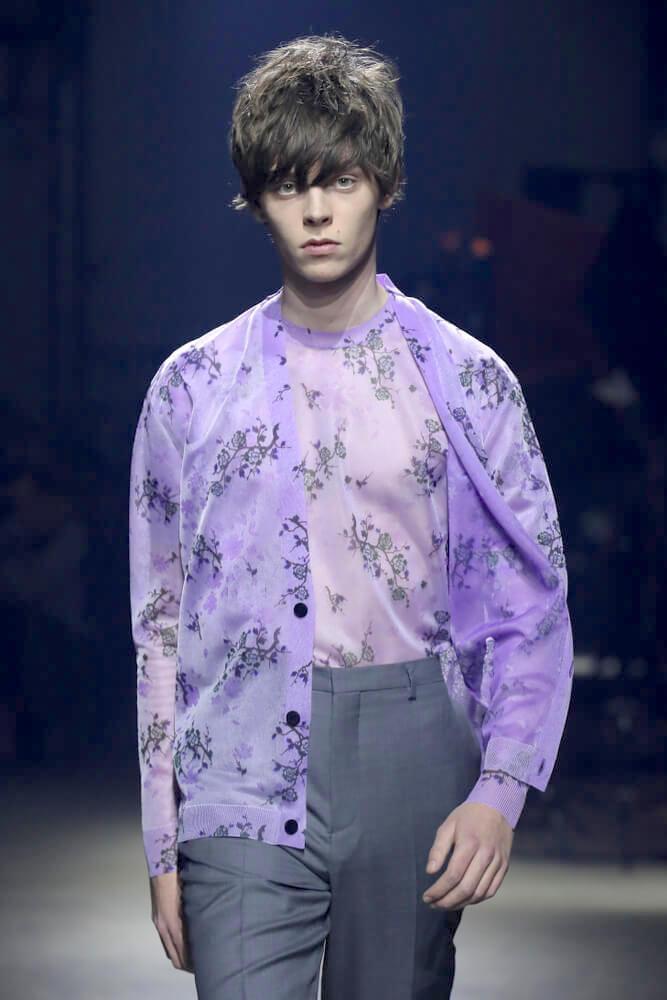 Florals seem to always be a womenswear trend for the warmer months, but this is not usually the case with menswear.

However, the 2018 Paris Fashion Week runways proved otherwise, with floral prints being put out by quite a few different designers.

The florals used were mostly oriental-inspired, with details such as tropical flowers and intricate fronds making an appearance.

Want to know which designers to look at for more inspiration?

Here are a few who really shone when it came to oriental-inspired florals:

For those of you who prefer trends that are more subtle, and are still mainly in-keeping with traditional menswear, then an oversized collar is a great look to try.

These exaggerated colors come in so many different shapes and sizes, from the oversized shearling collars from Alexander McQueen to the subtly larger collars on the leather jackets from Paul Smith.

Wearing socks and sandals was always a huge fashion faux pas, with many claiming that this would be the biggest fashion mistake one could make.

However, as always in the world of fashion, things change…

Wearing socks with sandals is now the trendy thing to do, no matter what you choose to pair them with. In fact, one of the most common pairings on the 2018 Paris Fashion Week runways were wearing socks and sandals with a suit. From the baggy suits of Prada to the traditional black and white suits from Balenciaga, the quirky footwear actually seemed to add quite a bit of personality to each outfit.

Don’t like the idea of wearing socks with sandals, but still want to make a statement with your footwear?

Try wearing a suit with a pair of boots instead.

This is an extremely powerful look, and designers put their own spin on this in such an interesting way.

From the suede boots with extended soles from Rick Owen to the leather Mexican police boots from Officine Generale, this is such a trendy look, but is one that is so easy to pull off. 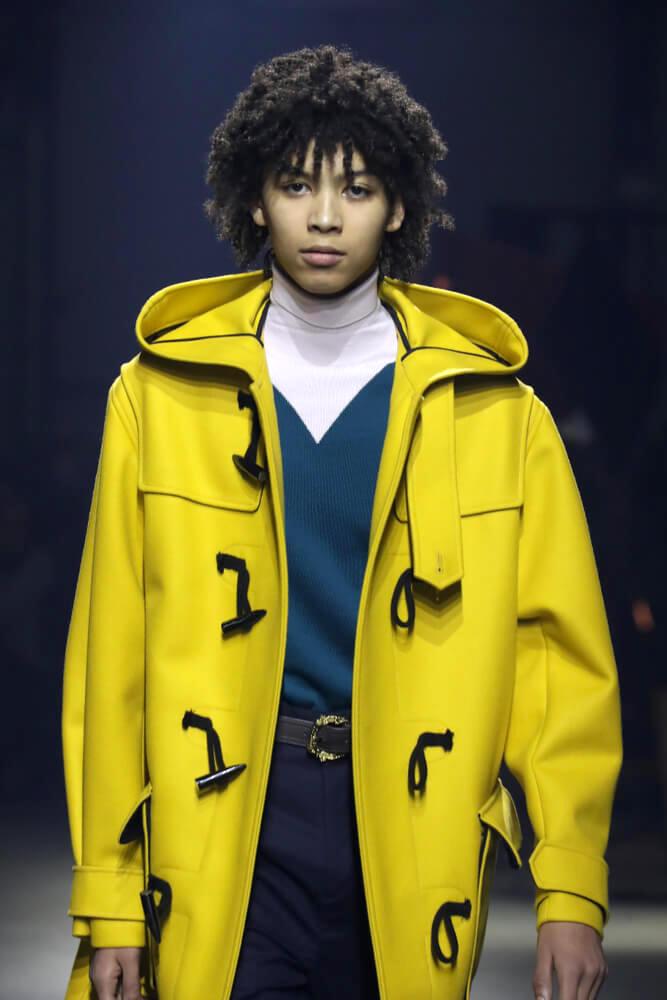 Menswear is often dominated by neutral and more subtle colors, making the bright colors trend a breath of fresh air.

One of the best designers to look at for inspiration with this is John Galliano, who created the collection for Maison Margiela. Not only did the actual runway itself feature bright and bold décor, but the colors used within the designs were so vibrant.

From orange knitted Aran cardigans to red wool coats, the rainbow of colors seen on the runway was such a visual feast.

Not sure if you can pull off such bold shades?

You do not have to go all out to begin with. Start with a brightly colored t-shirt, which you can easily cover up with a jacket if you are not feeling too confident. Then, as you get used to wearing colors more, you can begin to incorporate them more widely into your daily looks.

Do you often tuck your shirt into your pants?

This is how many designers styled their looks during Paris Fashion Week, giving a smart, dressed-up appeal to each outfit.

Dries Van Noten did this with traditional office-esque garments, while Pigalle gave a whole new meaning to athleisure by tucking a button-down shirt into sweat pants.

Stripes were seen all over the runways during the London and Milan Fashion Weeks, making it not much of a surprise that they featured heavily on the Paris Fashion Week catwalks too.

Of course, stripes are quintessentially Parisian, and the designs featured definitely showcased this.

The stripes seen at Kenzo were especially dramatic, with striped trousers worn with striped sports shirts, while the Balmain stripes were equally flamboyant, with monochrome stripes splashed across sequinned jackets.

Bold prints and patterns are a relatively new addition to the menswear world, but have already become quite mainstream.

Now to take it even further…

Rather than just wearing one printed item, and pairing this with single-colored garments, Paris Fashion Week runways featured models in a full outfit of mixed prints.

Haider Ackerman did this especially well, with his outfits still looking quite wearable, while Comme des Garcons really went all in, with bright florals, polka dots and more all worn together.

For some, wearing white slacks would be a nightmare, as they would dirty so easily. However, for others, this crisp and clean shade works extremely well, and can really brighten up an outfit without taking it to the extreme.

If you would like a high-waisted, but slightly oversized, pair, check out the styles from Lemaire, while Haider Ackermann has some cropped, raw hem versions, made from white denim. 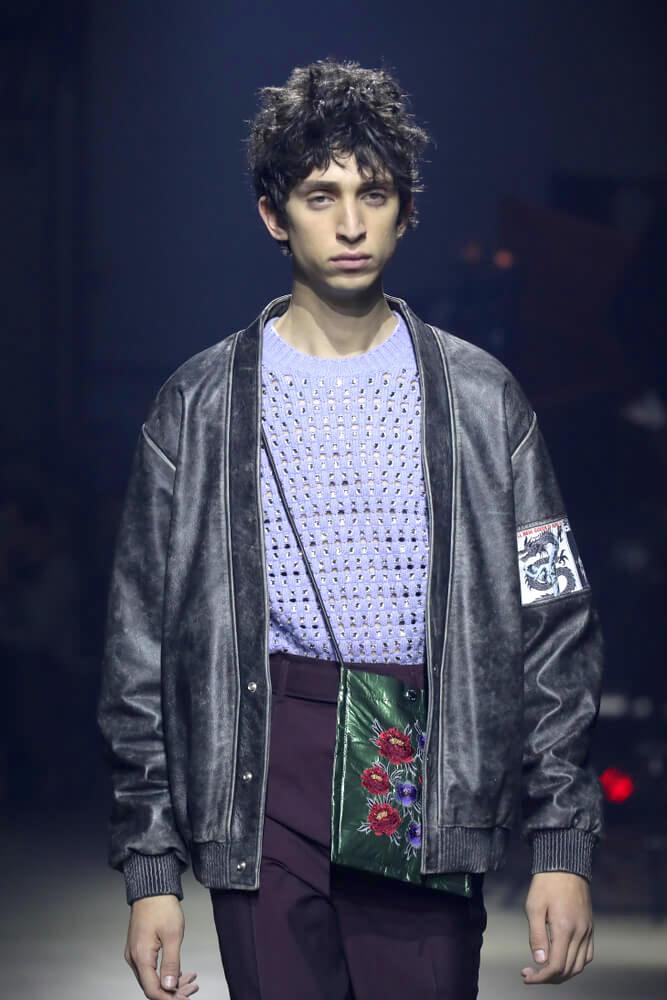 Sometimes, womenswear and menswear trends overlap, and this is exactly what has happened in the case of the cross-body bag. Not only has this style been seen on so many womenswear runways, but it was also extremely popular during the men’s shows of Paris Fashion Week.

While pilot bags were seen the most, just about every style of bag was turned into a cross-body design, from the boxy, bright yellow bags from Y-3 to the quirky Christian Dada bags that are reminiscent of an 80’s sound system.

If you would prefer a more subtle design, take a look at Kenzo, featured in the image above. These simple, black cross-body bags would work with just about any outfit, and are so toned down compared to what many other designers are producing.

Sportswear styles regularly make an appearance in menswear fashion shows, and 2018 was no different. This trend is perfect for those who do not enjoy wearing the more avant-garde designs, as the sportswear styles featured were more casual and toned down.

Check out the looks from Lanvin, which has everything from tailored high-waisted sportswear trousers to jackets inspired by the classic mac.

Hermes is another brand to look at, with their Paris 2018 collection featuring technical details, along with plenty of shine, with garments that would be quite easy to incorporate into your existing wardrobe.

British with a Twist

There are so many British fashion pieces out there that are true classics, and designers all over the world appreciate this.

The runways of Paris Fashion Week 2018 saw many British-inspired designs make an appearance, but with a unique twist added in from each designer.

Tartan was one British touch that featured especially heavily, with many urban brands putting together an homage to tartan. From Andrew Crews to White Mountaineering to Henrik Vibskov, there are so many different options out there.

From enlarged checks to Union Jack prints to deconstructed duffel coats, expect to see many British-inspired pieces hitting menswear stores near you.

Denim is such a classic fabric, and is one that will never really go out of trend.

However, there are always seasons when denim is used even more than usual in fashion collections, and those that were showcased at Paris Fashion Week 2018 are the perfect example of this.

From denim button-up shirts to denim suits to denim jumpsuits, you will likely be filling your wardrobe with multiple new denim items this year.

Want to know which designers have some of the best denim looks?

Here are a few to check out:

Don’t like the feel of denim but still want to emulate this trend?

If so, Facetasm is the brand to look at. From baseball shirts to jackets, many of the brand’s pieces looked as though they were crafted from denim, but are actually made from washed wool.

Patchworking is quite a quirky design feature, and, when done in the right way, can really add some extra interest and texture to a garment.

Not sure what patchworking is?

It refers to using other fabrics to “patch up” areas of a garment.

While this feature was most commonly featured in casual wear up until now, Paris Fashion Week has elevated it, with suit coats and formal trousers all featuring patchworking. Take a look at Junya Watanabe and Balenciaga for more ideas. 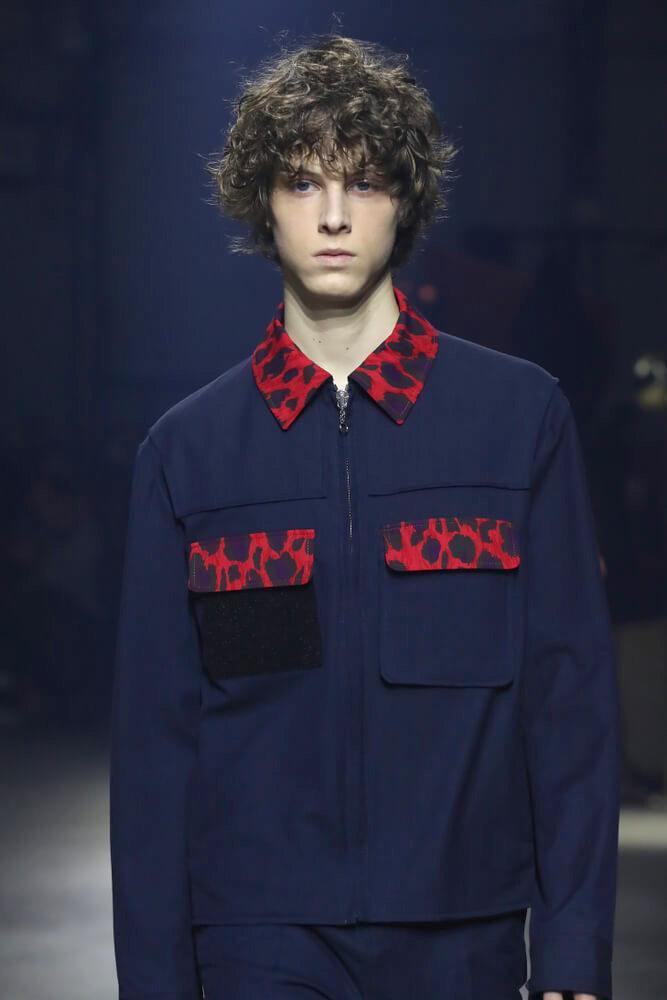 Animal prints are most commonly associated with womenswear, but Paris Fashion Week 2018 saw quite a few animal prints on its runways.

One of the best designers to look at for this is Kenzo, because not only did he produce large, all-over, animal printed garments, but he also created a few items that subtly incorporated animal prints.

Wondering which animal prints are the ones to opt for?

Let yourself be inspired by big cats. Both Alexander McQueen as well as Valentino featured tiger prints, while Kenzo opted for classic leopard prints instead.

Thinking ahead to the fall and winter?

If so, this is a trend to get on board with, as padded coats are going to be huge towards the end of this year.

Take a look at Prada, who created voluminous padded coats made from classic nylon, with colors ranging from a vivid blue to a deep black.

Fendi is another designer with standout garments, thanks to their padded and diagonally quilted coats, while the multiple drawstrings on the oversized coats from Y/Project definitely make a statement.

As always, Thom Browne took this trend even further, not only designing some fashion forward padded coats, but also padded blazers and trousers too.

The layer trend is another one that is well-suited for the cooler months, but working out from now which pieces you want to use in your own layered looks will give you a head start on the upcoming season.

Need some ideas on different layers?

Here are some to try:

No matter how confident you may be in the way you dress, it is always fun to mix up your look a bit. Whether you want to be daring with bold colors and exotic prints, or would prefer to keep it toned down with layered looks or a slightly exaggerated collar, these Paris Fashion Week takeaways should provide plenty of fashion inspiration for the rest of the year.