Everyone’s favorite American Idol is pregnant yet again! She announced it in the best way too, a totally spur of the moment confession to her fans right in the middle of a concert! 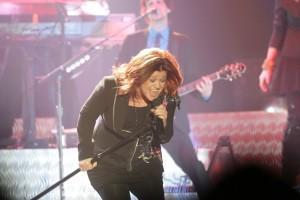 Fans in LA on August 19th were taken into Clarkson’s confidence when she suddenly spilled the beans, telling the crowd “I wasn’t planning on announcing this tonight…I’m totally pregnant.” And her fans, of course, went wild with applause! Kelly went on to explain “That’s not how I was planning on announcing that,” before then contextualizing her outburst by saying “Nothing’s wrong, I’m just super hormonal right now! I didn’t want you guys to think I was on pills or anything.” Aww Kelly, always concerned about her fans! The best part of the announcement? When she triumphantly announced “I haven’t barfed yet!”

This will be Kelly’s second child with her husband, Brandon Blackstock, to whom she has been married since October 2013. Their daughter River, born in June 2014, is adorable and an absolute delight, if we can take anything away from Kelly’s posts on social media. Clarkson has been very active with posts about her baby girl, and if this announcement is any indication, it seems like she’ll be just as honest and open with her pregnancy and second child!

Kelly has been open about the difficult time she had during her first pregnancy, revealing she had to be hospitalized and that she was forced to take off more time than she would have liked. Hopefully she’ll have less trouble the second time around so she can keep touring and working on new material!

It’s always nice to see celebrities we admire sharing personal milestones with their fans, especially when it’s such delightful news! Kelly’s announcement couldn’t have been more special to her fans there that night, and I love her honest exuberance. So congratulations to Kelly Clarkson and her family, we’re wishing you all the best!