Why Everybody Loves John Oliver and Why You Should Too

Why Everybody Loves John Oliver and Why You Should Too

Many of you might have first encountered John Oliver as a correspondent on the wildly successful and always hilarious The Daily Show with Jon Stewart, or some of you might have first met him as the greasy and wimpy psychology professor Dr. Ian Duncan on the zany show Community. And some of you still might not know who he is, and let me tell you it is an honor to introduce him to you now as the amazing host of his own show, HBO’s Last Week Tonight with John Oliver. 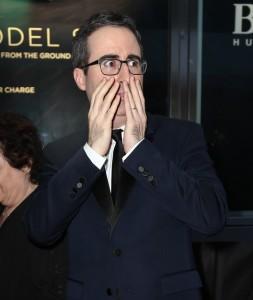 Last Week Tonight is another comedy news programming show that’s kind of a mix of a long-form version of Saturday Night Live’s Weekend Update and his old gig The Daily Show. What sets his show apart from these other two similar formats is that he’s doing real, actual journalism. Though he might deny this claim, insisting he’s just a comedian and not a journalist, there’s no denying that his show as a whole is doing some amazing investigative reporting.

The show aside, John Oliver himself is the perfect host. He’s lovable and relatable—he’s the perfect everyman that you just know is on our side. His humor is the perfect mixture of intelligence and self-deprecation and you can’t help but fall a little bit in like with him when you hear his charming British accent. His segments are thoroughly researched and take on important issues—some of which would be super difficult to watch for their seriousness if not for the lightness he brings with his perfect comic delivery. He presents his facts in a way that will get your blood boiling at the hypocrisy involved in politics, and then have you laughing out loud in the next breath.

He’s also refreshingly honest. He doesn’t stay detached from his topics—when doing a segment on the death penalty, he admits how difficult of a moral issue it is and says he’s no more able to give you the answer than anyone else. John Oliver also always seems to take the side of the underdog, shining a light on issues surrounding poverty in America that often get pushed to the side (see his segment on PayDay loans or bail bonds as examples). He also isn’t afraid to call out anyone, no matter what their status—he’s gotten in public spats with the president of Ecuador and has engaged in a feud with former FIFA official Jack Warner, and all of these feuds are equally hilarious.

So if you’re still not convinced that John Oliver just might be your next celebrity hero, please watch any of the brilliant segments from his show that are available on YouTube, and I defy you not to fall just a little bit in love with him.